The Bank for International Settlement (BIS) issued a research paper addressing the hypothetical benefits and risks of central bank digital currencies (CBDC), which are being widely discussed in recent times. The paper adds to these discussions by taking stock of how progress and plans in this area are developing, based on a global survey of central banks.

Responses show that central banks are proceeding with caution and most are only at a conceptual stage with their work. However, a handful have moved to considering practical issues and a couple of central banks with idiosyncratic circumstances might issue a digital currency in the short or medium term.

The 2018 report by the Committee on Payments and Market Infrastructures (CPMI) and the Markets Committee (MC) defines CBDCs as new variants of central bank money different from physical cash or central bank reserve/settlement accounts. Based on four key properties, the CPMI-MC report provides a taxonomy of money (“The money flower”) which delineates between two broad types of CBDC: general purpose and wholesale – with the former type coming in two varieties (Graph 1). 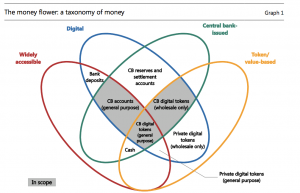 The four key properties of money are: issuer (central bank or not); form (digital or physical); accessibility (widely or restricted); and technology. In terms of technology, the report distinguishes between money that is token- or account-based. In payment economics, a key difference between tokens and accounts is in their verification: a person receiving a token will verify that the token is genuine, whereas an intermediary verifies the identity of an account holder.

However, the definition of tokens varies considerable across scientific fields, and other reports distinguish between value- or account-based forms of CBDC. In sum, this paper discusses the three variants of CBDC highlighted by the grey- shaded areas within the “money flower” above.

The first is a “general purpose”, “account-based” variant, ie an account at the central bank for the general public. This would be widely available and primarily targeted at retail transactions (but also available for broader use).

The second form is a “general purpose”, “token-based” variant, ie a type of “digital cash” issued by the central bank for the general public. This second variant would have similar availability and functions to the first, but would be distributed and transferred differently.

Bitcoin plunged through several closely watched price levels to the lowest since late 2020 as evidence of deepening stress within the crypto industry keeps piling up against a backdrop of monetary tightening.  https://www.bloomberg.com/news/articles/2022-06-18/bitcoin-breaches-20-000-for-the-first-time-since-2020-l4jjjy7z

EIOPA – Publication of the Annual Report 2021

The European Insurance and Occupational Pensions Authority (EIOPA) has published its Annual Report 2021, setting out its activities and achievements of the past year. The year 2021 continued under the influence of COVID-19 pandemic. EIOPA carried out a demanding Annual Work Programme and welcomed Petra Hielkema ...more »