The Bank for International Settlement (BIS) published a snapshot of the outstanding OTC derivatives transactions statistics at the end of the first semester of this year. The main results are summarized as follows:

Gross market values declined despite an increase in notional amounts

US dollar contracts drove the increase in notionals 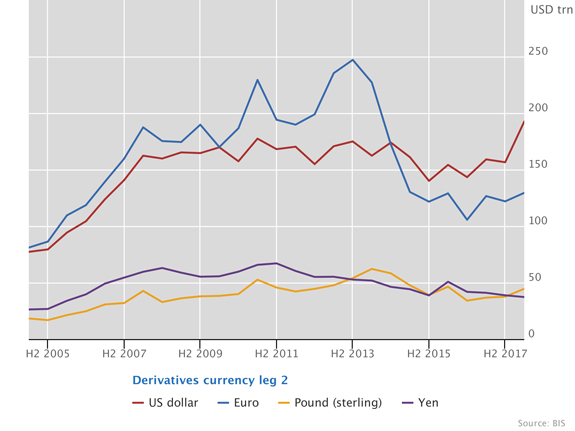 The increase in notional amounts outstanding was driven mainly by OTC interest rate derivatives, in particular for US dollar-denominated contracts, which rose from $157 trillion at end-2017 to $193 trillion at end-June 2018 (Graph 2, red line). An increase in US dollar activity was also seen in exchange-traded derivatives markets, where the average daily turnover of futures and options on dollar interest rates climbed to a record high of $9.6 trillion in the month of February. This increased activity may reflect changing expectations about the path of future US dollar interest rates during the period. The notional amounts outstanding of euro-denominated interest rate derivatives also went up over this period, but more modestly, from $122 trillion to $129 trillion (blue line).

Turning to OTC foreign exchange (FX) derivatives markets, notional amounts rose to a record high of $96 trillion at end-June 2018, up from $87 trillion at end-December 2017. This was also driven by activity in short-term instruments. In contrast to other OTC derivatives, most FX derivatives require counterparties to repay the notional amount at maturity and thus can be viewed as a form of collateralised borrowing, with the associated foreign currency repayment and liquidity risks. 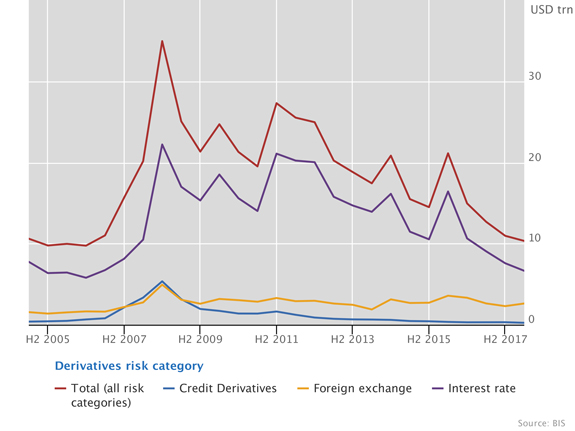 The continuing decline in gross market values reflected in part ongoing structural changes in OTC derivatives markets. These changes include central clearing and greater possibilities for trade compression – that is, the elimination of economically redundant derivatives positions. In addition, in recent periods an increasing number of banks have been recording variation margin on cleared derivatives as settlement payments rather than as transfers of collateral. The practice of so-called settled-to-market (STM) allows counterparties to take ownership of the collateral that they receive. Consequently, daily payments of variation margin are recorded as settlements of the derivatives transactions rather than as transfers of collateral and the market value of the derivatives is reset daily to zero. STM, which is increasingly adopted for cleared swaps in particular, thus results in lower market values for a given derivative.

Clearing in credit default swap markets was steady at 54%

In OTC interest rate derivatives markets, the proportion of contracts cleared was also steady in the first half of 2018, at around 76% overall. Across currencies, the proportion ranged from 73% for euro interest rate contracts to 77% for US dollar contracts and 89% for Canadian dollar contracts. In OTC FX derivatives markets, clearing accounted for only 3.0% of dealers’ outstanding contracts at end-June 2018. While low, this was up from 2.4% at end-December 2017.

Climate risk shocks could spread throughout the financial system, notably in the event of a disorderly green transition… https://www.ecb.europa.eu//press/pr/date/2022/html/ecb.pr220726~491ecd89cb.en.html