The Bank of International Settlement (BIS) quarterly review this June focused on the CDS market, ten years the CDS “Bangs”. The CDS Bangs were the first real attempt to build a Standardized CDS market, to face this market’s shortcomings, which were fully unveiled by the Great Financial Crisis.

Many authors (see [2] and references therein) document how the shape of the market eventually resulting from these Standardization processes should be smoother and less resilient to regulatory interventions on a global scale. BIS Quarterly Review sheds now light on these forecasts. Ten years after the first CDS Bang was issued by the International Swaps and Derivatives Association (ISDA), a sufficiently informative dataset is available.

The  first issue to be tackled when shaping the new CDS market, is the contracts’s schedule of payments. On the buyer’s side, this task can be accomplished in a relatively simple way. Standard contracts provide for quarterly payments of standardized coupons, so the cash flow is easy to retrieve as long as the interbank money market remains stable. On the seller’s side, a thorough analysis is conducted on the Reference Entity’s default date, payment dates of bonds recoveries depending on different covenants.

When all contracts are signed based on the Standard ISDA format, it is easy for a Central Counterparty (CCP) to net opposite position among a restricted number of big dealers.  The provision for an Upfront Payment to be coupled with the standardized coupon piles liquidity up the CCP table. In this way, it is easier for the CCP to fulfill its major role of counterparty risk mitigator. 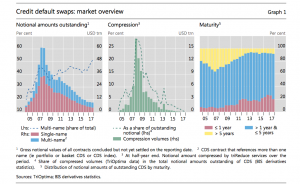 Figure 1 shows the evolution of the CDS market by notional amount (left), notional amount after netting opposite positions (center) and by maturity buckets (right). The CCP is able to accomplish the task of actually reducing the notional amount to the netted values by guaranteeing the netting transactions. It is not straightforward to compute the clearing rate out of the number of cleared contracts. (see the discussion in the BIS complete report [1]). Figure 2 shows that, despite the different metrics used in computing such ratios, the upward trending importance of  CCPs is quite clear. 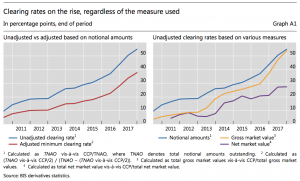 The number of cleared contracts increased rapidly from the CDS Standardization of contracts, reaching a peak of half the number of contracts according to some of the proposed ratios. The presence of CCP is relevant especially in view of the rise of contracts written on Sovereign Refererence Entities, which shifted from the 2% of total CDS share before the crisis  to a peak of nearly 17% of total CDS share in 2015, and hovers actually around 15%. CDS entail exposure to two types of risk: the underlying credit risk of the reference entity and the counterparty risk faced by the CDS protection buyer. 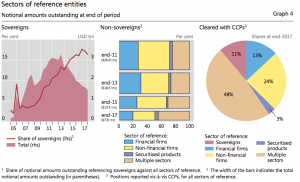 The BIS report argues that both types of risk have diminished. The underlying credit risks have shifted towards sovereigns and portfolios of underlying reference securities with overall better credit ratings. The rise of CCPs and the increased standardisation in the CDS market facilitated the netting of exposures. This, in turn, has helped to lower counterparty risks. Despite these structural changes, credit risks is not retained to be concentrated at specific counterparty types.