In the last years diversity on boards, especially of non-executive board members, has become a key issue of corporate governance. Arguments in favor of diversity highlight the benefits both in terms of efficiency and better monitoring. Diversity (of gender, nationality, age, professional background) is deemed to broaden the debate within the boards and help to avoid the danger of “groupthink”; to increase creativity and innovation; to improve problem solving and promote the exchange of ideas, providing new insights and perspectives to the board. Firms, however, can incur also costs from greater diversity, due to communication and coordination problems, higher conflicts among directors, longer decision-making process.

Since 2010, following the 2007-2008 financial crisis, the issue has been addressed by the European Commission (EC) in the Green Paper “Corporate governance in financial institutions and remuneration policies”, where it is underlined how a lack of diversity within boards could in some cases have contributed to the failure of non-executive board members to effectively challenge management decisions. The topic of board diversity was then re-addressed in the 2011 Green Paper on corporate governance, where the EC restated the importance for listed companies of having diverse non-executive members. Recently, the EC has adopted the Directive 2014/95/EU that requires to certain large companies to disclose information on the policy adopted in relation to board diversity.

The European Commission has also devoted special attention to a specific aspect of diversity, namely gender diversity. In November 2012, the Commission proposed legislation with the aim of attaining a 40% objective of the under-represented sex in non-executive board-member positions in publicly listed companies, with the aim to accelerate progress towards a better gender balance on the corporate boards of European companies. The issue of female participation at board level has also been addressed by legislative initiatives in many countries (Norway, Italy, France, Belgium, Germany) and through self-regulatory initiatives in others (United Kingdom, Portugal).

Given the emphasis being placed on board diversity as a part of good corporate governance, the relationship between board diversity and firms’ value has become one of the main topics explored in the related economic literature. However, existing empirical evidence has produced mixed results. This literature usually refers to the board as a whole or to its non-executive members. Indeed, many legislative actions adopted until now regard only non-executive directors, with the idea that their diversity could improve the monitoring ability of the board. However, whether diversity of executive directors has an impact on firms’ performance has remained an unexplored empirical question. Only a few authors have investigated the topic, mainly with reference to US listed firms.

In a recent paper (Quaderno di finanza n. 85, available at http://www.consob.it/web/area-pubblica/quaderni-di-finanza) it is explored the issue of board diversity for the board as a whole and for its executive members only, for a sample of listed firms across five European countries, i.e., France, Germany, Italy, Spain and the United Kingdom, over the period 2006-2016. Different measures of diversity are explored, in line with previous research which usually distinguishes between observable (demographic) and non-observable (cognitive) diversity. The former includes differences in gender, age, race and ethnicity, while the latter refers to diversity in professional background, education, values, knowledge.

Until 2012 women’s representation on boards of the firms in our sample has remained limited, with Italy recording the lowest figures (10.5%; Figure 1). Since then, however, the presence of female directors has significantly grown thanks to the gender laws and to the self-regulatory initiatives adopted over time.  Gender balance has shown the largest acceleration in major French companies, where by the end of 2016 women accounted on average for 37.3% of directors, up from 8% in 2006. Following the newly enacted gender law, Italy is now the second country, after France, displaying the highest percentage of female directors (29% at the end of 2016). In Germany female representation in supervisory boards has almost tripled its value over the time span under review, from 8.5% in 2006 to 22.6% in 2016. Differently from the countries analyzed so far, the rise in female representation in major British and Spanish firms was driven by self-regulatory initiatives. In the United Kingdom the percentage of women holding a seat in the boards of the sampled companies has risen from 9.0% in 2006 to 25.7% in 2016. As for Spain, at the end of 2016 major Spanish companies still lag behind their European peers, with a percentage of female directors equal to 17%, which is nevertheless higher than its 2006 level equal to 6%.

Representation of foreign directors has increased across all the European sampled countries, although at a different pace. Listed firms in the United Kingdom have traditionally been the most diverse in terms of nationality, while Italian corporates lie at the other end of the spectrum (Figure 2). At the end of 2016 foreign directors accounted for 30% of the board members in major British companies (25% in 2006), while achieving 12.5% in the boards of the Italian peers (6.7% in 2006). Board composition in terms of nationality has experienced a rise in diversity also in Germany and Spain, where the percentage of foreign directors has passed from almost 11% to 25% and to 22% respectively, while it has remained substantially stable in France.

In Figures 4-6 observable board characteristics are calculated separating for executive and non-executive directors at the end of 2016 (for Germany data refer respectively to the members of the management and the supervisory boards).

As expected, executive directors are less diverse then non-executives, both in terms of gender and nationality. As for gender diversity, the 30.4% of non-executives is represented by women versus the 6.5% of executives. This evidence is partly explained considering the way listed firms have reacted to the regulatory and self-regulatory initiatives on gender diversity. Indeed, different studies show that female directors appointed pursuant to the gender laws are mainly independent directors and only in a few cases cover executive roles (Figure 4). When it comes to directors’ nationality, heterogeneity is still higher among non-executives. However, this is particularly evident in France and in Spain, while the mismatch is less pronounced in the other countries. Overall, almost 24% (16%) of non-executive (executive) directors is foreign (Figure 5). As for age, on average non-executive directors are nearly 59 years, almost 4 years older than executives. Differences are less pronounced in France and in Italy (Figure 6).

Finally, in Figures 7-10 are reported data on non-observable directors’ characteristics, such as directors tenure, the number of other quoted boards which directors have served upon, the years of experience as directors on quoted boards and the percentage of graduated directors.

With the exception of Germany, executive directors have on average a higher tenure. Overall, they have been directors for almost 8 years, compared to 5.6 years of non-executives. Executives tenure is particularly high in France and in Spain, where on average directors are board members since almost 10 years, and lower in Germany and United Kingdom (the average tenure is 6 years; Figure 7). Looking at the directors professional background, data on the number of other quoted boards served and on the years spent as directors in other listed firms show that non-executives have on average a higher directors experience. On average, they have served as directors on other 3.4 boards of listed companies (compared to 2.6 boards for executives) and have been directors in other listed companies for 3.2 years (2.3 years for executives); Figure 8 and Figure 9). As for the level of education, almost everywhere there is a high percentage of graduated directors (higher than 80%), with the exception of supervisory directors in Germany, who are graduated in 6 cases out of 10 (Figure 10).

The paper investigates the relationship between firm performance (as measured by Return on assets – Roa) and board diversity through panel data analyses with firms fixed effects. When diversity of the entire board is considered, the analysis fails to find a significant relationship between firms’ performance and board diversity. Only the variation in directors tenure seems to affect (negatively) Roa.

However, when the link between firms’ performance and executive directors diversity is concerned, a different result emerges. In particular, data indicate a positive relationship between Roa and both gender and nationality diversity among executives. In line with previous results, only the tenure heterogeneity has a (negative) effect on performance.

The study points out how also executives’ diversity could be beneficial to companies. Until now the main literature developed on the topic has underlined the benefits of diversity in terms of better monitoring: the presence of non-executive directors with different backgrounds, demographic characteristics and education can ultimately improve the monitoring ability of the board by fostering creativity and innovation, reducing the risk of groupthink, promoting the exchange of ideas. However, the benefits of diversity can bring improvements also beyond the better monitoring, by enhancing the ability of executive directors to manage the company affairs. Indeed, more creativity and innovation, a lower risk of groupthink, the contribution of new insights and perspectives, are also beneficial for the company management. Corporate diversity could favor a better understanding of the marketplaces, which are themselves becoming more diverse; diversity could also enhance the effectiveness of corporate leadership, since diverse top managers take a broader view; diversity could promote more effective global relationship and improve problem-solving. 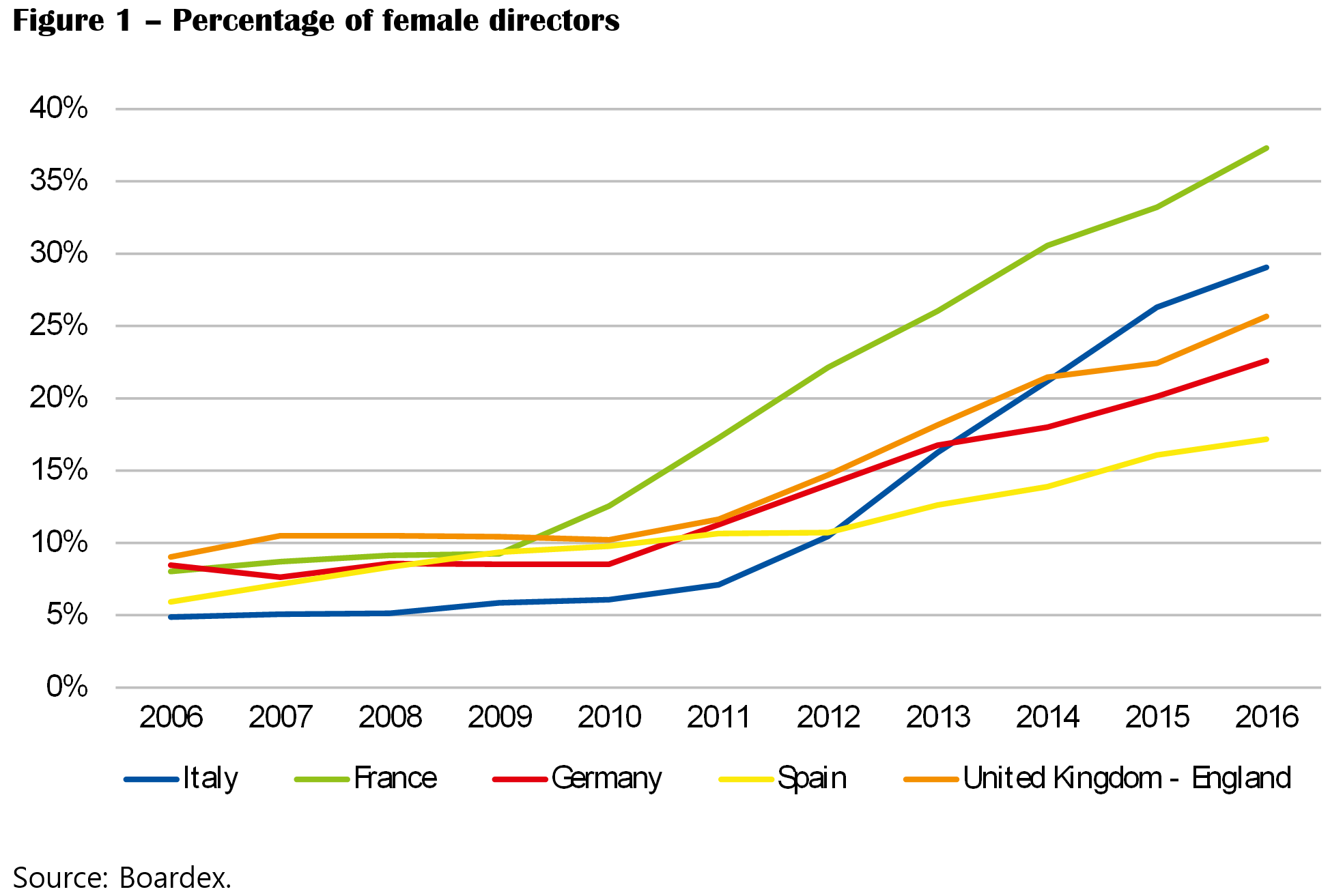 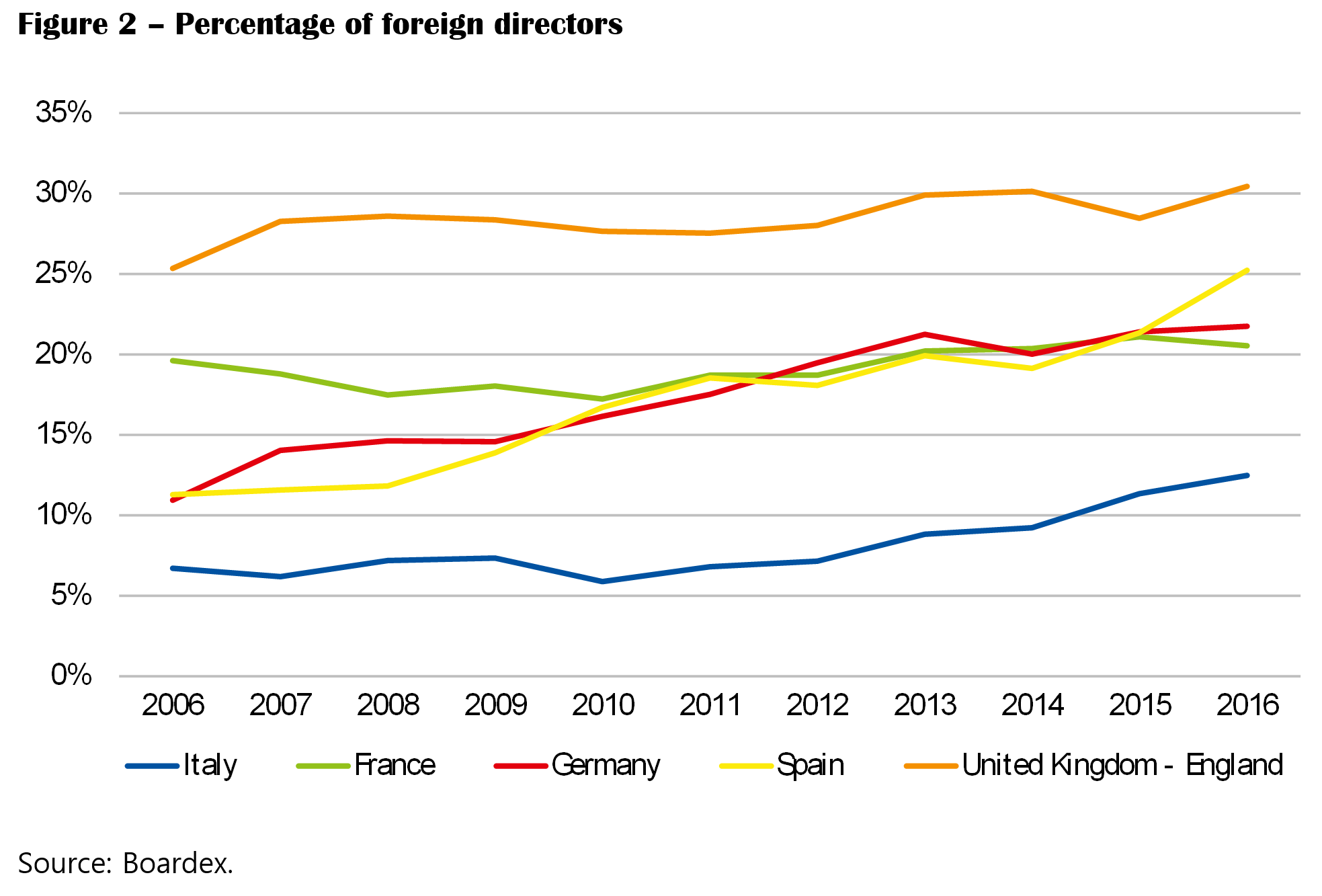 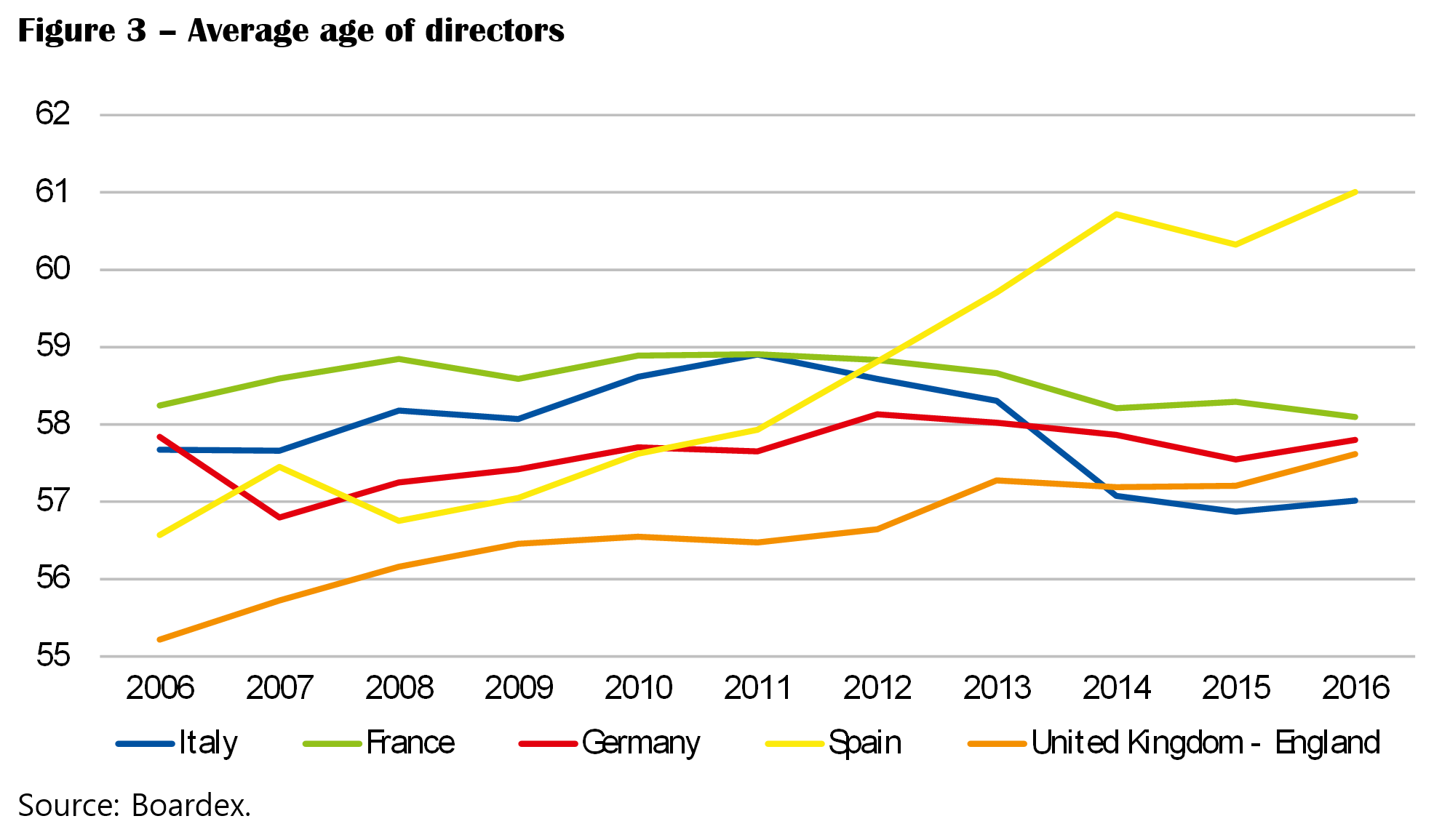 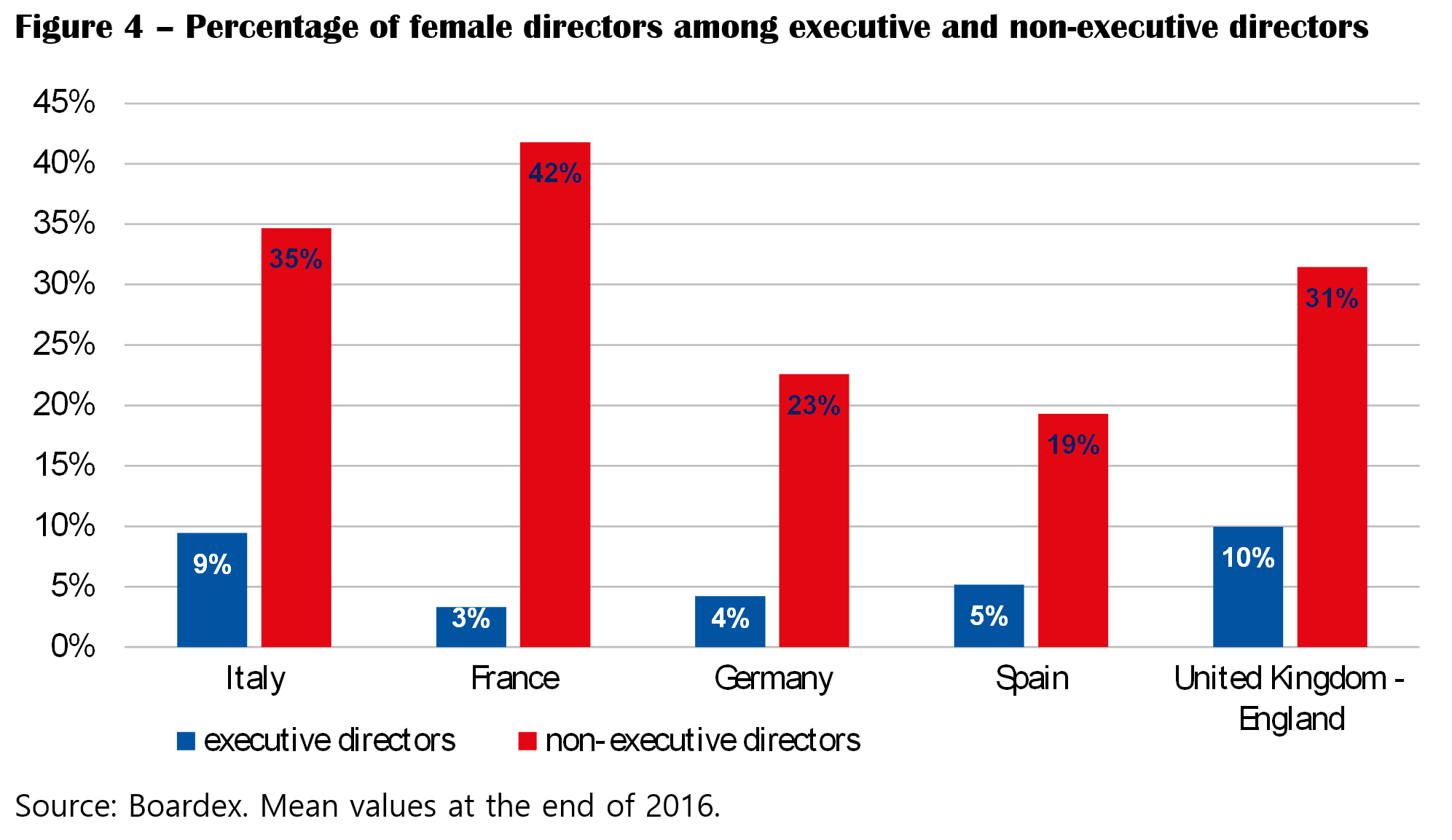 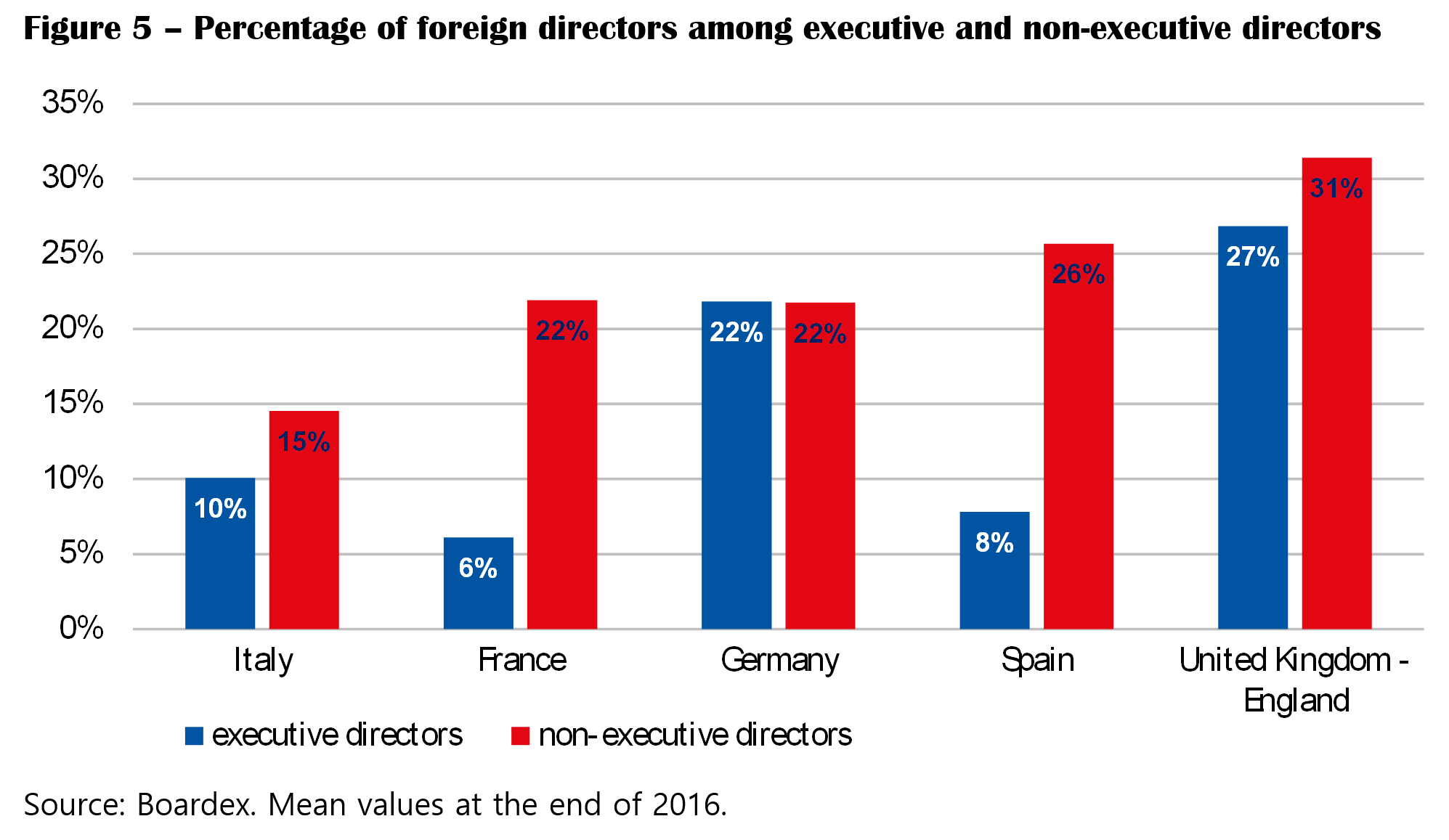 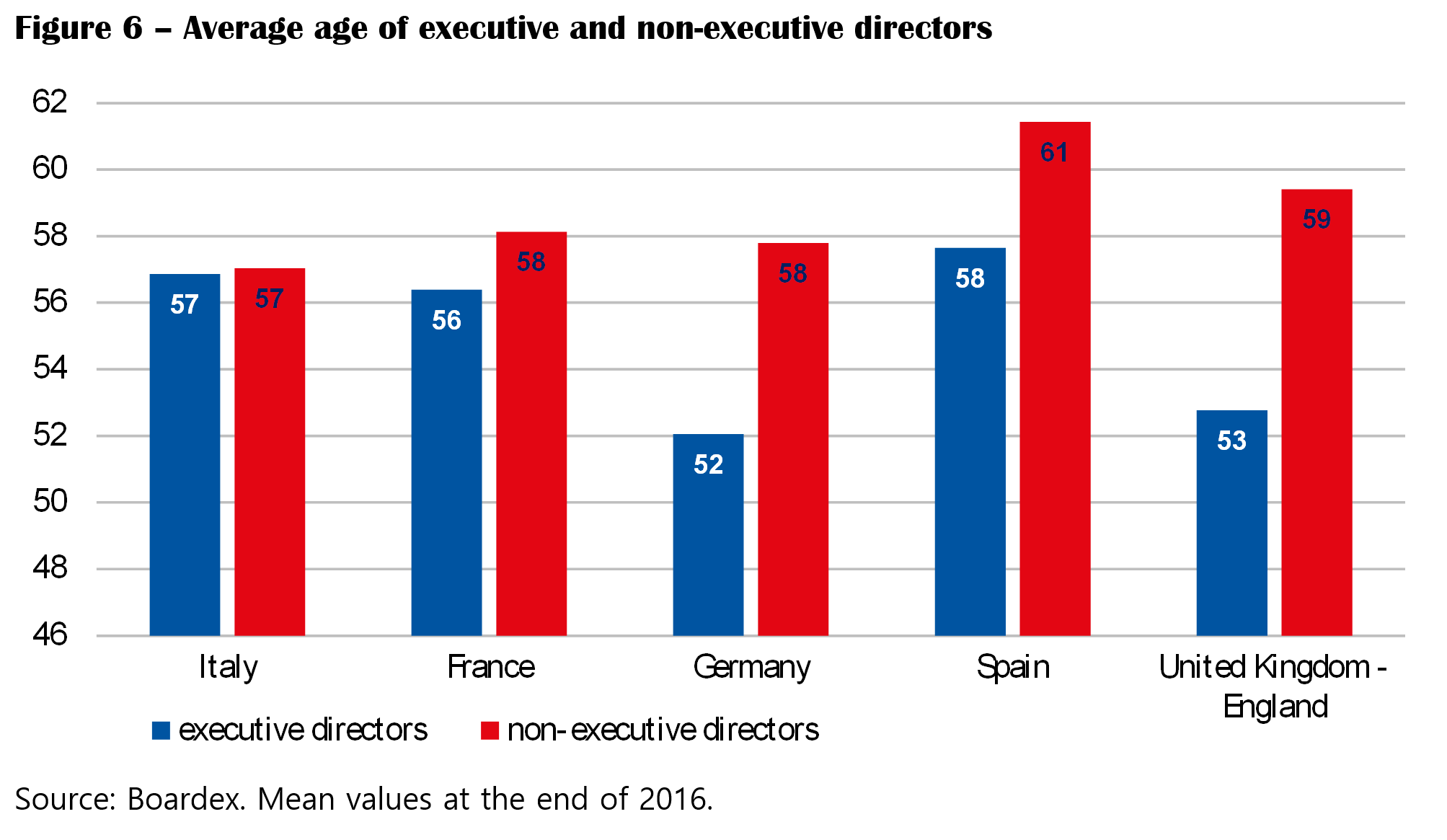 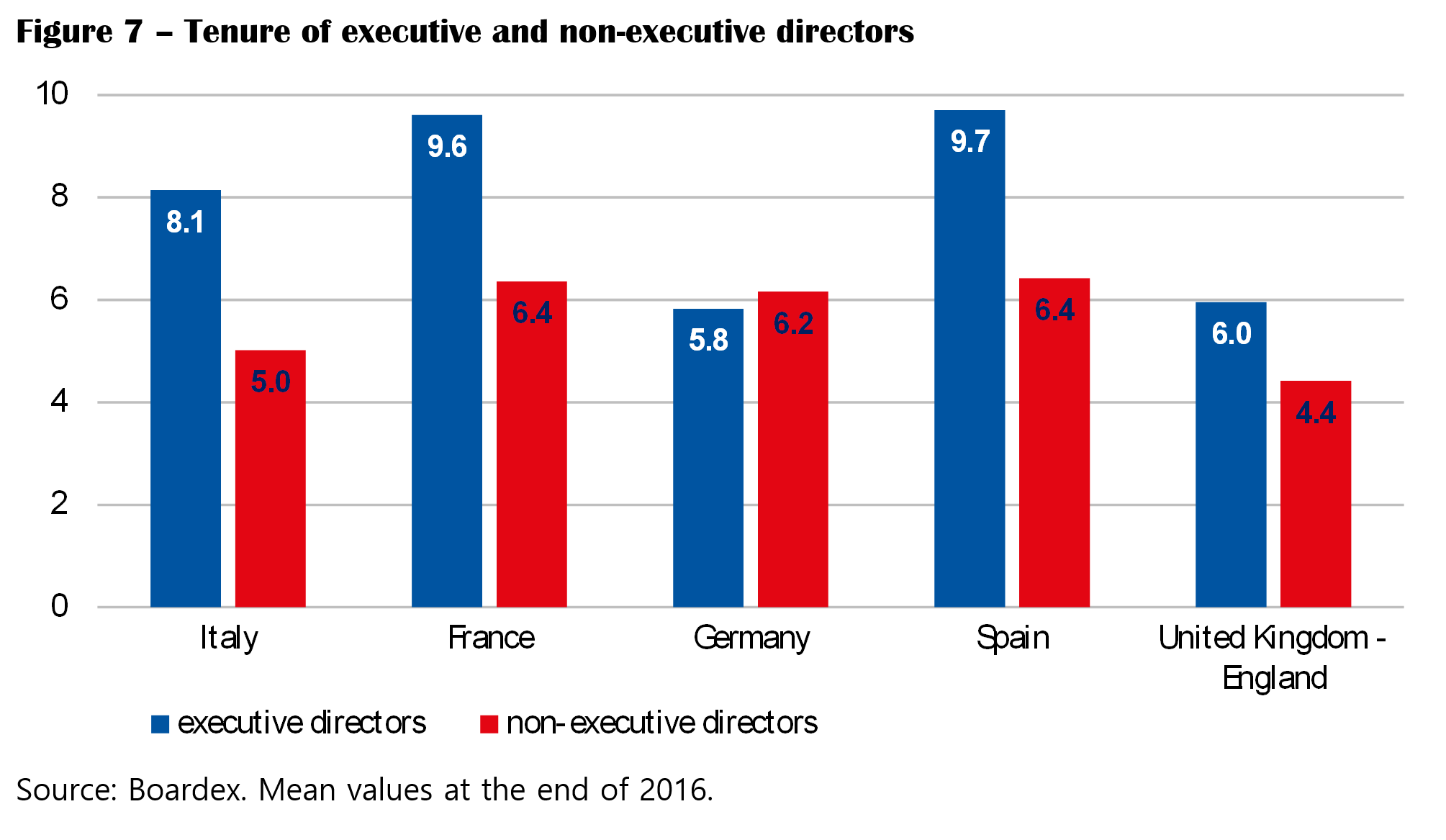 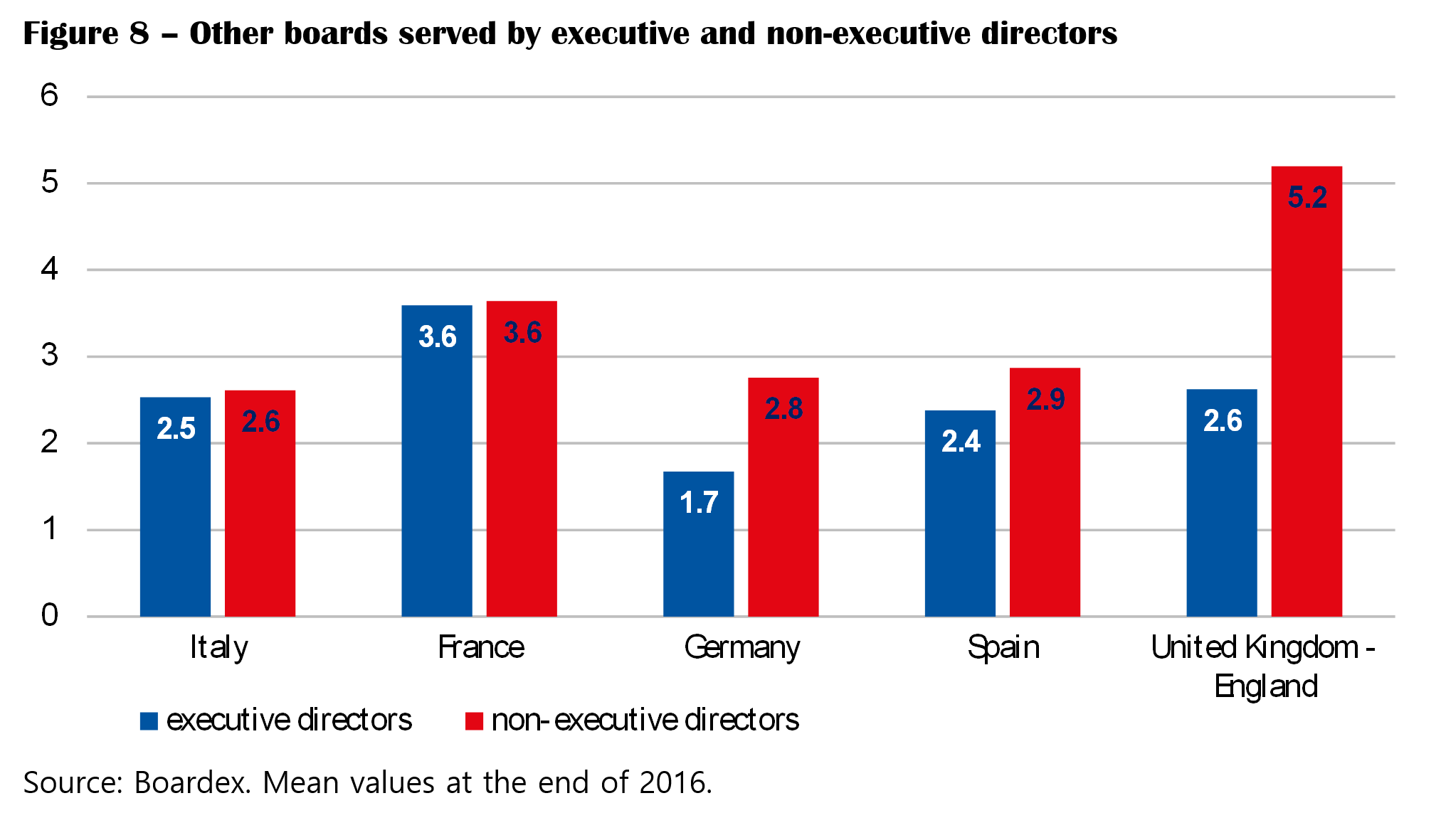 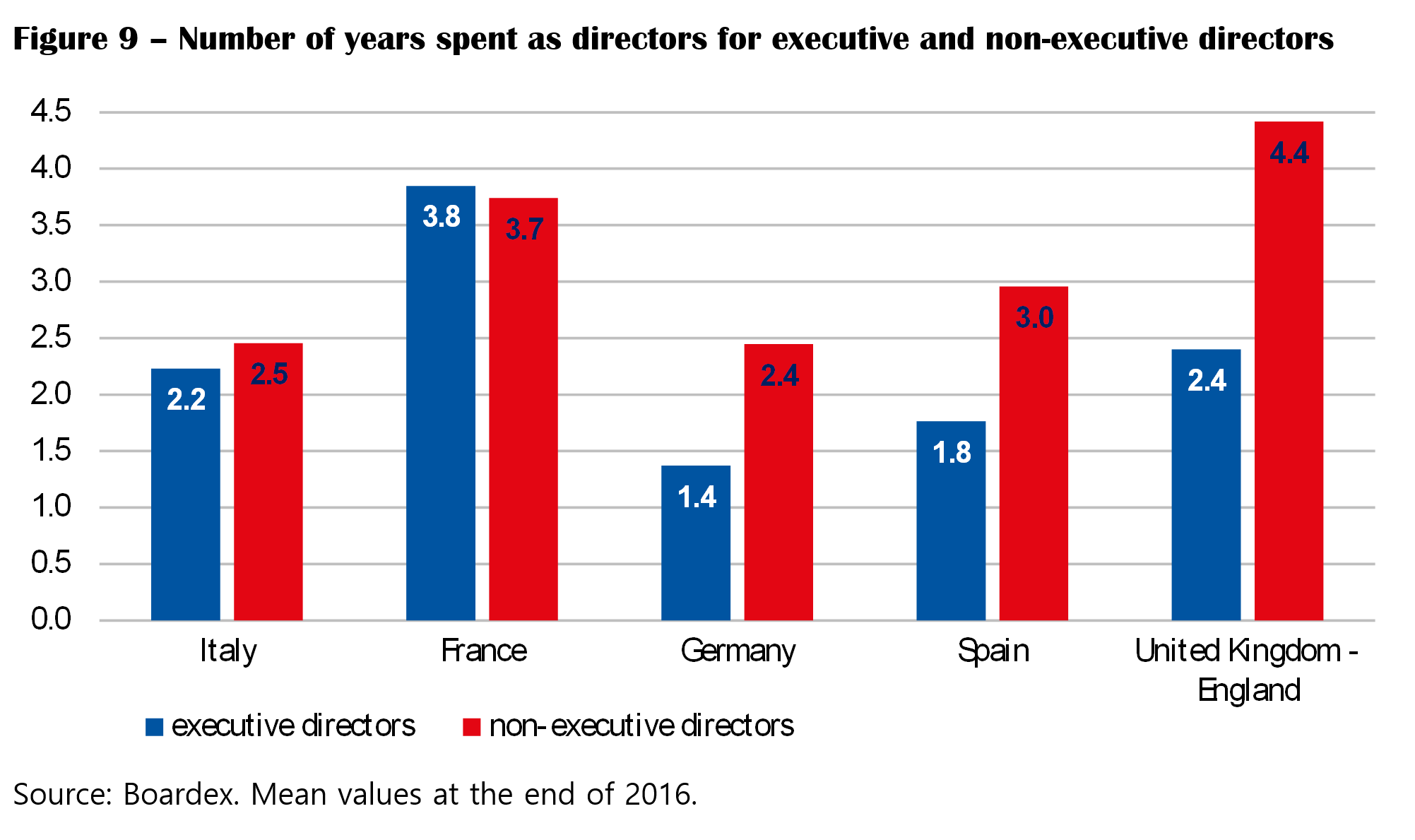 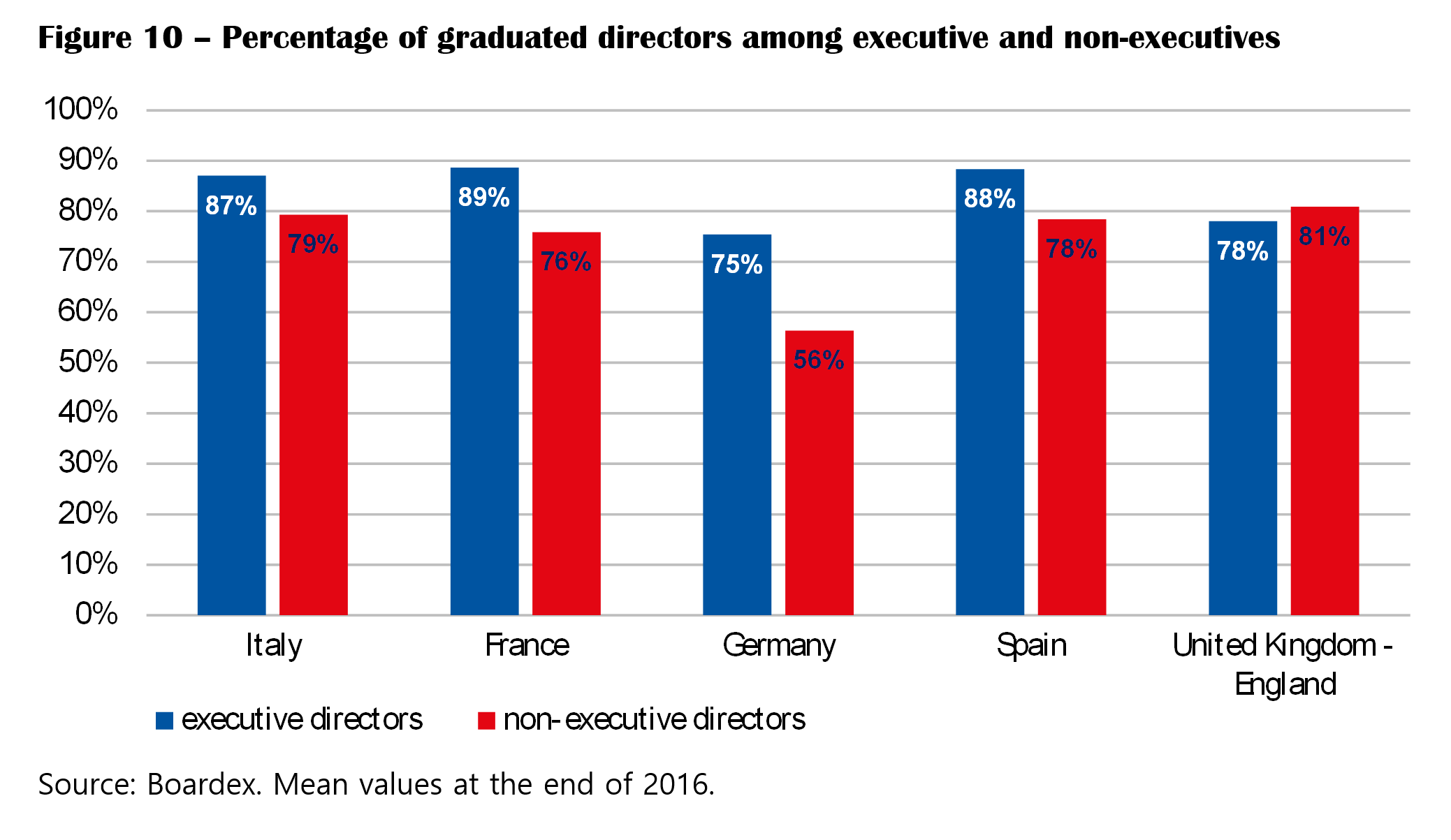