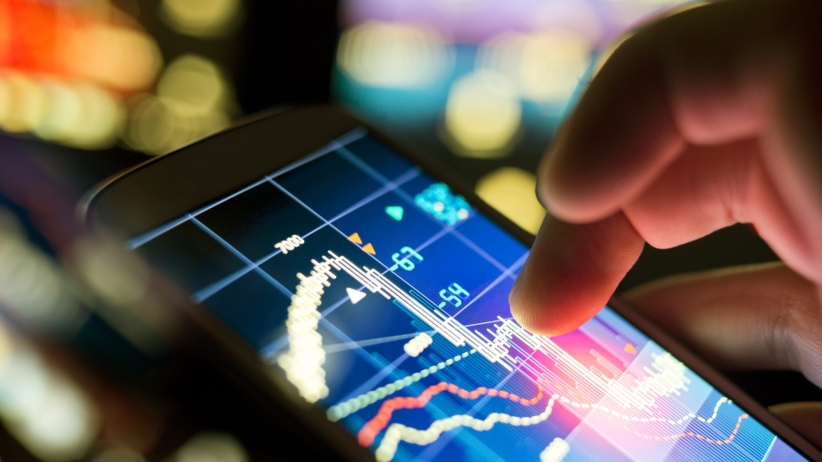 We propose a market-based, early warning measure of credit risk able to enhance the observed CDS spreads with a risk premium that derives from contagion by means of a correlation network model. We then combine the proposed measure with balance-sheet information and liabilities composition, in order to investigate the systemic contagion that arises from the resolution of a failing financial institution within the context of the European single resolution framework. To this aim we consider three alternative scenarios: liquidation, private recapitalisation or a bail-in resolution action. The application of our methodology reveals that, from the system’s viewpoint, a private intervention and a bail-in resolution minimise losses with respect to the liquidation alternative. In addition, the bail-in resolution slightly reduces contagion effects with respect to a private intervention. Our empirical findings show that the proposed measure is quite effective to help the decision making process, from both an individual bank’s perspective and an overall regulatory viewpoint.

The systemic effect of banks resolution

Financial institutions are among the most relevant contributors to systemic risk. For this reason, after the recent financial crisis, policies aimed at monitoring and supervising systemic risk have been developed in several countries, within newly established macro-prudential frameworks. The introduction of new regulatory frameworks in the light of a coordination between micro- and macro-prudential tools is the result of one of the main lessons learnt from the great recession: it is now clear, in fact, that micro-prudential supervision alone, with its predominant focus on individual banks, can not easily detect incipient systemic risks, because they derive from interconnections with other banks and with the economy. In addition, while the goals of macro- and micro-prudential policy are clearly distinct, their instruments tend to coincide, in the sense that instruments commonly regarded as macro-prudential can, in principle, be used also by the micro-prudential supervisor as part of its supervisory evaluation and intervention process. Consistently with this framework, the Euro area has introduced the SSM as a single independent supervisor, distinct but closely connected to the European Central Bank, having all the supervisory instruments. A different body, the European Systemic Risk Board (ESRB), provides macro-prudential policy analyses and recommendations.

The specific focus on the Euro area is particularly interesting also because essential policy developments have been recently introduced: in particular, the 2014/59/EU directive, known as the Bank Recovery and Resolution Directive (BRRD), and the Single Resolution Mechanism (SRM), which has become fully operational, for all the 19 Euro area countries, on 1 January 2016. In particular, while the BRRD determines the rules for how EU banks in a crisis situation are restructured and how losses and costs are allocated among banks’ shareholders and creditors, the SRM is directly responsible for the resolution of all banks in Member States participating in the banking union.

Before the BRRD and the SRM, when a bank was deemed failing or likely to fail, supervisory authorities could essentially choose between liquidation, with high costs for all involved stakeholders (shareholders, bondholders, depositors, borrowers) and a public bail-out, with high costs for taxpayers and further negative macroeconomic consequences (see e.g. Halaj et al., 2016) that include moral hazard problems for too-big-to-fail financial institutions, and a vicious loop between bank risk and sovereign risk.

Among its objectives, the BRRD also proposes an alternative solution for covering losses that, while avoiding the use of public funds, imposes on private creditors an ordered reconstruction of the bank, avoiding the extreme consequences that would occur in case of liquidation. In this sense, the BRRD contains a bail-in tool that enables the resolution authority to satisfy claims according to a waterfall hierarchy in the liabilities, in which junior liabilities are bailed-in first, followed by the more senior ones.

The aim of the paper by Giudici and Parisi (2017) is to understand the systemic implications of the bail-in tool, comparing them with two other possible alternatives, namely liquidation and private intervention.

More precisely, the paper starts examining the joint evolution of the Corporate Default Swap (CDS) spreads of a set of financial institutions. The use of CDS spread data allows the development of a partial correlation network model that can explicitly measure the propagation of the default probabilities of banks within the financial system. The measure can thus be employed, within the context of the Single Resolution framework, to evaluate the potential losses of banks in case of a distress event under the three possible actions (liquidation, private intervention, bail-in) mentioned above. In the methodological setting, the choice of one action with respect to the others is driven by the minimisation of the potential losses for each single bank (that can thus independently decide whether to participate to a private intervention or not), and for the entire banking system as well.

More in detail, the proposed methodology can be employed in a distress scenario, meaning a banking system where one ore more financial institutions are failing or likely to fail. In this context, the authors compare three different possible actions: a) the “troubled” institution has not enough regulatory capital and bail-inable liabilities to absorb losses and/or to meet regulatory requirements (Pillar 1, Pillar 2, leverage ratio and regulatory buffers). In addition, it is not deemed systemic, and is thus put into liquidation; b) the “troubled” institution is helped by a private intervention, that is exemplified by means of a capital injection deriving from the other banks in the system; c) the “troubled” institution has not enough regulatory capital in order to absorb losses still meeting regulatory requirements (i.e. Additional Tier 1 and Tier 2 conversion is not sufficient), but it has enough bail-inable liabilities and is considered as systemically important, so it undergoes a bail-in resolution process.

Under scenario (a) the troubled bank defaults and affects its neighbours through a shock in their expected losses, as a consequence of contagion effects. However, after a while, the bank system will reach a new equilibrium, without the defaulted bank and, thus, affected by less contagion risk. Under scenario (b) the troubled bank does not default and, consequently, does not affect the others through an immediate shock in their default probabilities. However, it continues being part of the banking system, so that all the other banks in the network will still be affected by the contagion risk coming from the persistence of a highly risky bank. In addition, all the banks that decide to participate to the private intervention become exposed to such bank, thus increasing their potential losses. Finally, under scenario (c) the troubled bank keeps being part of the system and continues to affect the others as under scenario (b); in addition, burden sharing losses are imposed to banks as creditors of the troubled bank.

The design of these three scenarios allows the identification of the “best” action in terms of a losses minimisation problem, by considering the banks’ and the system’s perspective. In the former situation, each bank is allowed to derive its own losses distribution under the three alternatives and, consequently, can decide whether to take part to the private intervention or not. In the latter case, the resolution authority is allowed to derive the potential losses for the entire banking system under the three alternatives and, consequently, can decide whether the resolution tool has to be preferred in terms of losses minimisation, or whether it should be considered as the last option.

The system’s perspective introduced in this study is also crucial for another important policy implication: the measurement tool, in fact, could be employed to evaluate whether a failing bank, for which no private intervention is possible, is systemically relevant and, therefore, maintained in the system conditional on a bail-in resolution or, instead, deemed as not relevant and, therefore, liquidated.

The Italian banking system is an interesting case study, as in early 2016 Italian banks have organised the support of an equity fund, called Atlante, which has, among its main aims, the recapitalisation of “troubled” financial institutions. Each bank has decided, on a voluntary basis, whether to allocate capital in the Atlante fund: as a result, a medium size lender, Banca Popolare di Vicenza, that had been found strongly undercapitalised by the European Central Bank, has been recapitalised with the help of most of the banks in the system, thus avoiding bail-in. Another distressed bank, Veneto Banca, has followed the same path.[1]

The application has been focused on the seven banks for which CDS data are available and reliable (source: Markit): Banca Popolare di Milano (BPM),  Banco Popolare (BAPO), Intesa San Paolo (ISP), Mediobanca (MB), Monte dei Paschi di Siena (MPS), Unicredit (UCG), Unione Banche Italiane (UBI). MPS has been considered as the “target” bank of the analysis, and it is considered in a failure or likely to fail situation. This assumption, moreover, corresponds to reality as talks have been recently underwent between the European Central Bank, the European Commission, the Bank of Italy and the Italian Government, in order to possibly trigger a precautionary recapitalisation.

The computation of partial correlation networks relies on the time series of the expected losses for each bank, and they are reported in Figure 1. 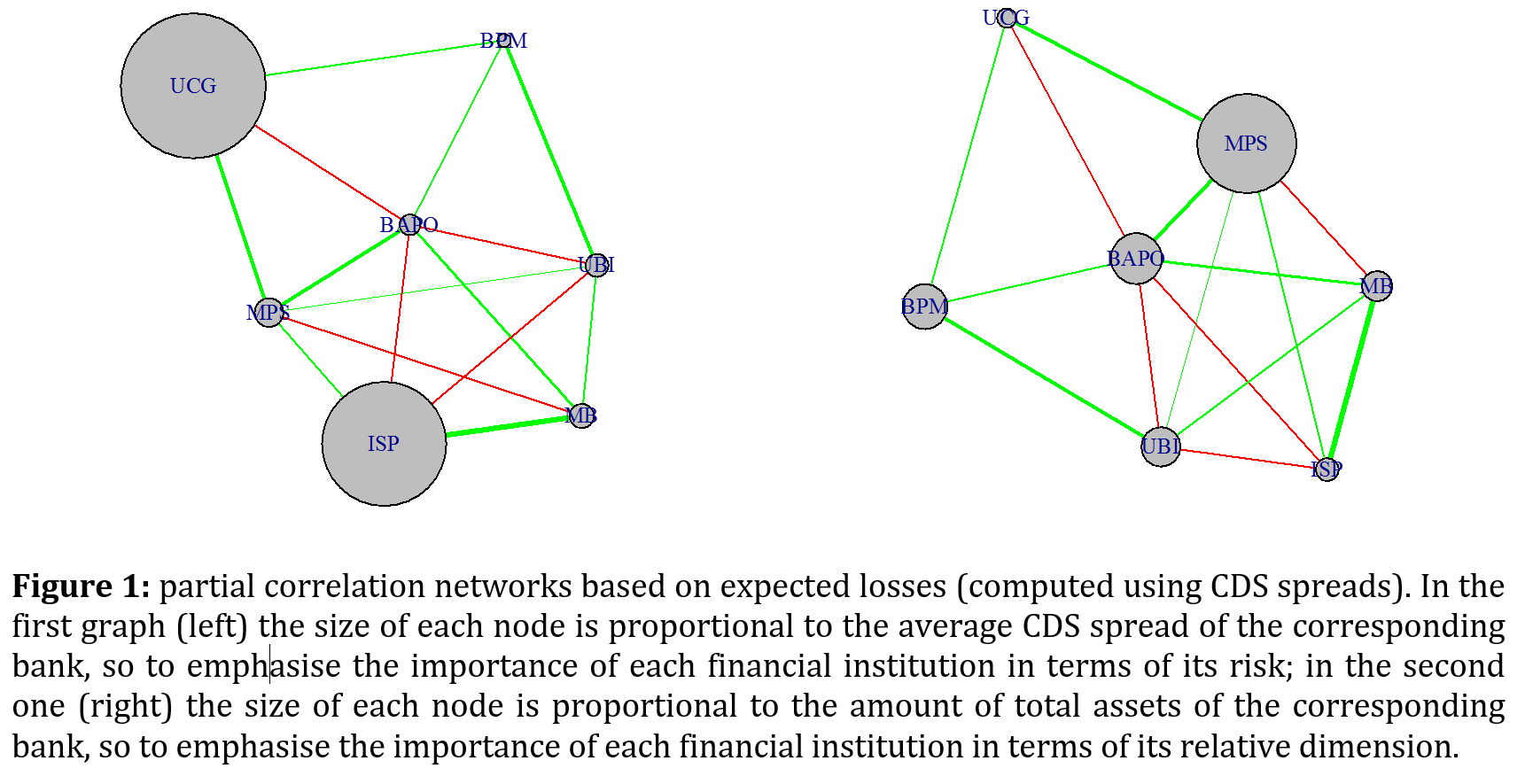 Figure 2 shows a comparison between the aggregated (over time) expected losses produced by the three alternative scenarios on the entire banking system. 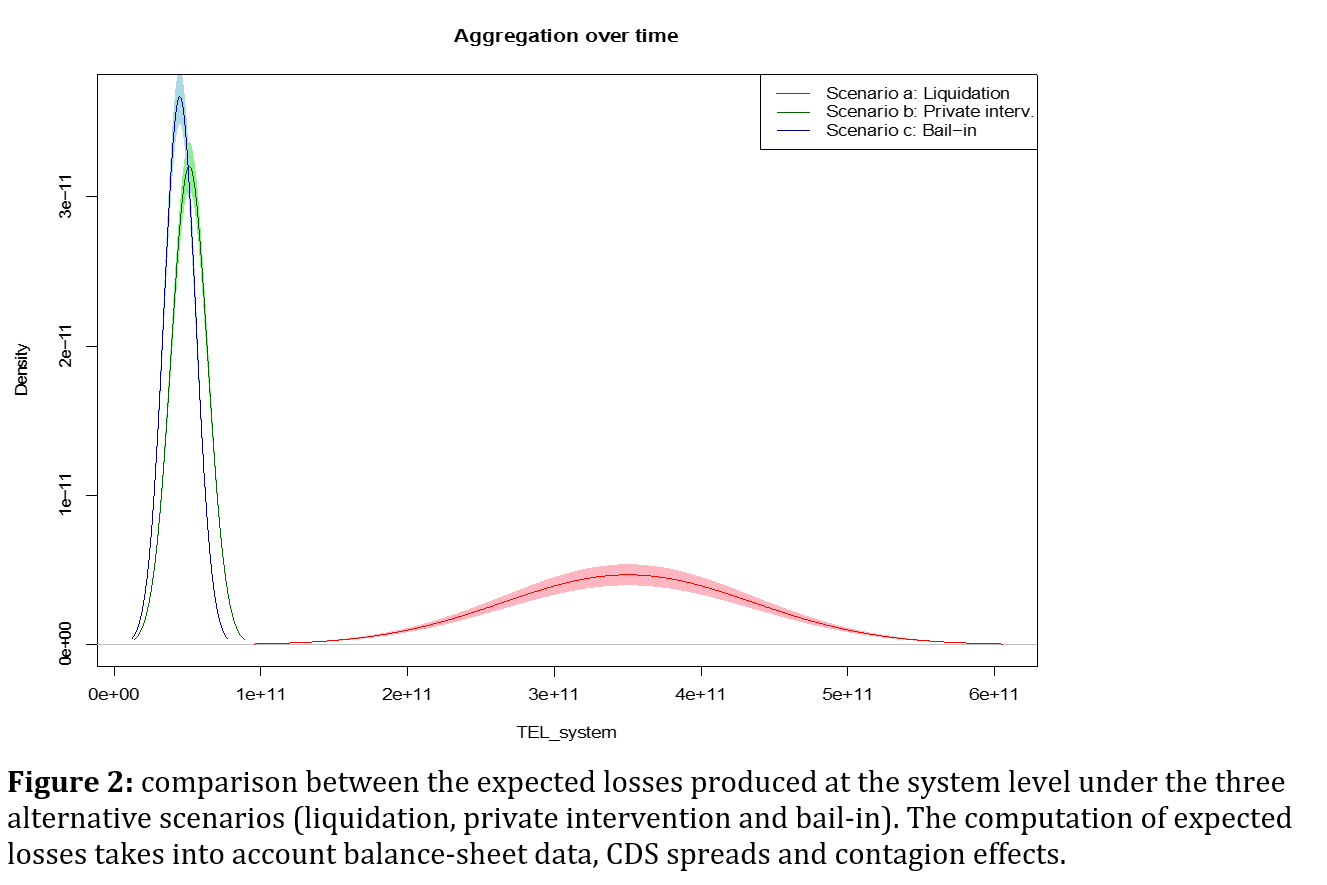 Figure 2 shows that the expected losses at the system level are minimised under the hypothesis of a private intervention or a bail-in resolution: the liquidation scenario, in fact, appears to produce much higher and worse consequences in terms of financial stability. As previously underlined, this result also depends on the large size of MPS, which makes the shock produced in case of liquidation strongly negative in terms of propagation of expected losses.[2] On the other hand, and also confirming expectations, the bail-in resolution slightly reduces contagion effects with respect to a private intervention.

Finally, in order to understand how the increase in expected losses under the hypothesis of private intervention or bail-in depends on the level of risk of each bank, the authors have computed the first order differences between the two, by using different level of CDS spreads for MPS. 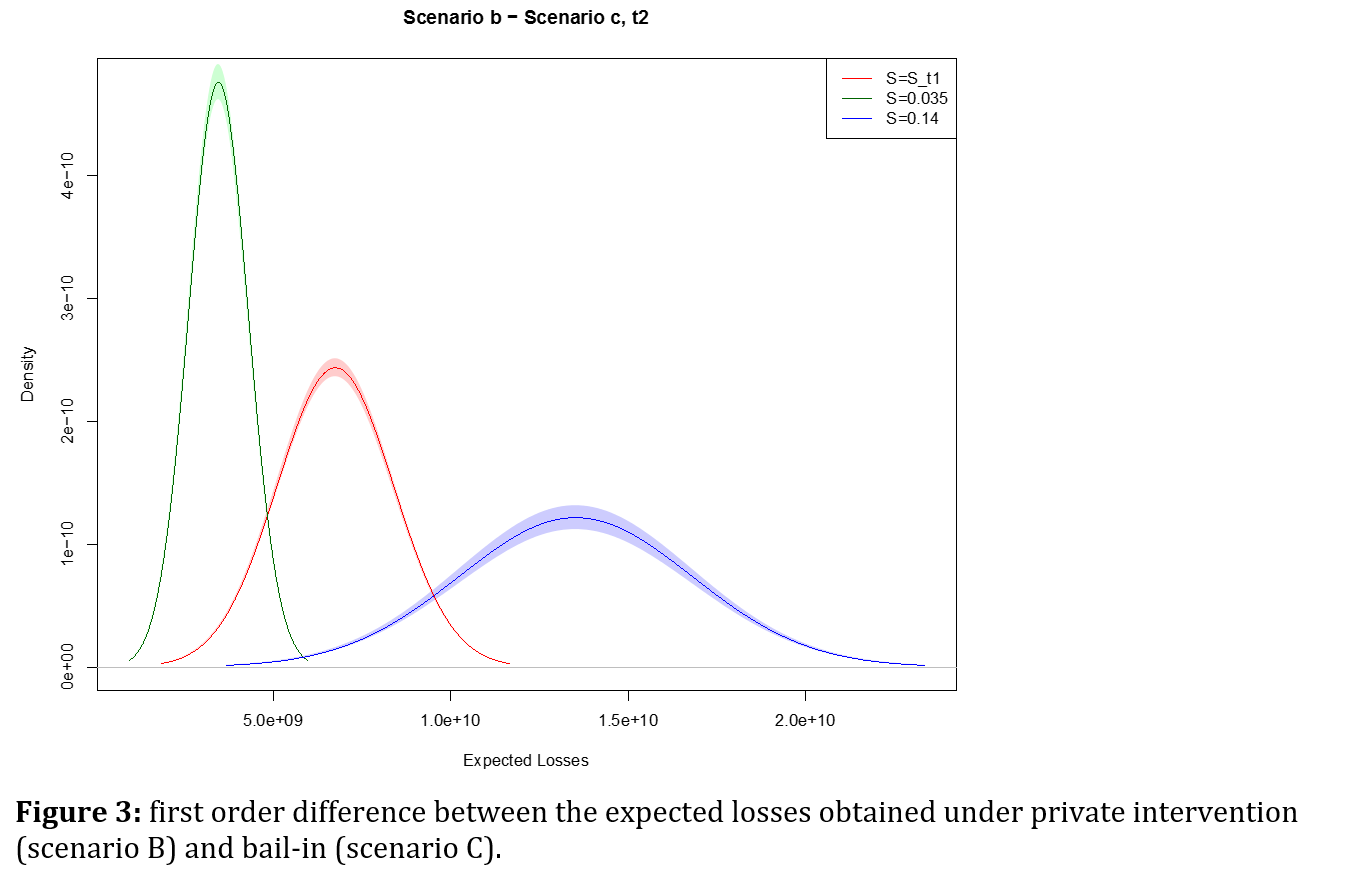 The results presented in Figure 3 underline that the reduction in expected losses under the bail-in scenario increases as the troubled bank in the system increases its level of risk: this means that the bail-in scenario minimises losses, and this effect is even stronger when the financial institution identified as failing or likely to fail does not recover after the resolution decision.

[4] BBRD (May 2014). Establishing a framework for the recovery and resolution of credit institutions and investment firms. Directive 2014/59/EU of the European Parliament and of the Council.

[1] The on-going supervisory discussion, however, is not limited to Italian Banks. The Spanish Banco Popular was declared as failing, and the private intervention from Banco Santander has beenrecently approved by the supervisory authority. And just before the SRM came into force, the Portuguese Banco de Espirito Santo was split into two bridge banks with the help of a private intervention from other banks in the system.

[2] This study, however, focuses only on the direct consequences on the balance-sheet of the other banks, while it does not assess the impact of distress events in terms of macroeconomic factors or indirect effects on tax payers.