The European Central Bank (ECB) published today the yearly analytical report collecting the result of the  Survey on the Access to Finance of Enterprises (SAFE) for the year 2017. The survey is conducted on a sample of Small-Medium Enterprises (SME) across Europe. Table 1 summarizes the number of SMEs involved in the survey for each member of the European Union (EU). 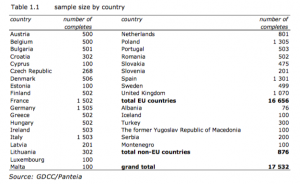 The main results are summarized in the ECB press release of the SAFA 2017.

The financial situation of firms further improved, albeit at a slower pace than in the previous survey round. From October 2017 to March 2018, the percentage of euro area SMEs reporting a higher turnover decreased (24%, down from 27%). The moderation in turnover was also reflected in profits, as 4% of euro area SMEs reported increases, down from 5%, in a context of growing labour costs (50%, up from 49%) and other production costs (54%, up from 48%).

In net terms, SMEs continued to indicate improved availability of bank loans (14%, from 12%), with the highest percentages in Spain (24%), Portugal (19%), and Ireland (18%). SMEs attributed these improvements to a persistently high willingness of banks to provide credit (19%, from 18%). Although Greece continued to lag behind the other euro area countries, there are also signs there of an incremental improvement in the willingness of banks to provide credit since the beginning of 2017.

SMEs signalled that the fall in interest rates on bank loans became more muted (with a net percentage of SMEs confirming -1%, compared with -5% in the previous round). At the same time, they registered a moderate increase in other costs of financing, such as charges, fees and commissions (26%, from 30%).

To emphasize the importance of banks for the financing decisions of firms, this survey round included ad hoc questions on firm/bank relationships along three dimensions: number, duration and exclusivity. Results suggest that SMEs tend to do business with less than three banks, on average. Long-term relationships prevail across different firm sizes, however, the concentration of loans varies across countries, reflecting the heterogeneity of financial structures across the various euro area countries.