The European Central Bank (ECB) published the consolidated banking data at the end of December. The annual CBD statistics cover relevant information required for the analysis of the EU banking sector, covering a broader set of data than the quarterly release. The end-December 2017 data refer to 377 banking groups and 2,884 stand-alone credit institutions operating in the EU (including foreign subsidiaries and branches), covering nearly 100% of the EU banking sector balance sheet. This dataset includes an extensive range of indicators on profitability and efficiency, balance sheets, liquidity and funding, asset quality, asset encumbrance, capital adequacy and solvency. 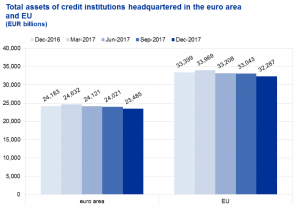 The amount of total assets of financial institutions keeps the downward trend of the latest year, both in the Euro Area (EA) and in the European Union (EU) as a whole. 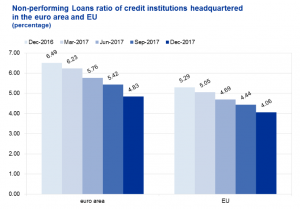 By examining the growth rate of each of these money stocks separately, we notice that the assets of financial institutions followed almost the main pattern in the EA and in the EU, decreasing by -2.89% and -3.30% on aggregate in the last year, respectively.

The NPL instead decreased much more rapidly in the Euro Area, especially in the last quarter of 2017; on aggregate, NPL decreased by nearly 28% in the EA compared to 25% in the EU.

As a consequence, the difference between the growth rate of banks assets and the growth rate of NPL is larger in the EA than in the EU. This indicates that the Euro Area is able to recover bank’s profitability faster despite the downward trend of financial institutions assets.

The European Insurance and Occupational Pensions Authority (EIOPA) published today its third paper in a series of papers on the methodological principles of insurance stress testing… https://www.eiopa.europa.eu/media/news/eiopa-publishes-third-paper-methodological-principles-of-insurance-stress-testing-climate_en

The hash rate surpassed 1.11 PH/s for the first time ever, breaking the previous high of 1.08 PH/s set on Jan. 13… https://cointelegraph.com/news/ethereum-hash-rate-scores-new-ath-as-pos-migration-underway