On the 26th of January 2016 EIOPA published the results of the first Stress test for Occupational Pensions. The exercise was conducted during 2015 (reference date 31 December 2014) by all the European Economic Area countries with material IORP sectors, covering all types of IORPS. It considers the impact of market and longevity shocks in pension schemes and provides an indication of the capability of absorbing losses when these risks bite.

The exercise is split in two modules:

– Adverse market scenario 1: significant decline in variable-yield securities (e.g. equities and real estate), decrease in interest rates and inflation rates, increase in spreads, drop in assets prices (more severe than in Adverse 2) – e.g. investments in assets usually qualified as safe, such as specific government bonds, were assumed to have lost this status.

the Satellite DC module assesses the impact on the expected benefits of members of Defined Contribution (DC) schemes which are 35, 20 and 5 years before the expected retirement date of 5 stressed scenarios

– Low return scenario 1 and 2: they incorporate a downward shift in the risk premiums of the assets; interests and inflation rates shocks are the same as in Adverse

– Increased longevity scenario (identical to the DB/hybrid one)

The results of the DB/hybrid module are measured in terms of both National Balance Sheets (NBS) and the Common Methodology (CM) proposed by EIOPA. This CM is out of scope of the current IORP II discussion and is only applied to make results comparable: it introduces a market consistent balance sheet where the risk free rate is used for discounting and it reflects the future developments by including different security and benefit adjustment mechanisms (the funding deficit risen in the stressed scenarios are covered by sponsor’s support, pension protection schemes and benefit reductions). On the contrary, the NBS are very different from one country to another (assets are either valued at market or book values, liabilities are discounted either with risk free rates or expected return on assets, the gaps revealed under the stressed scenarios are treated with different mechanisms) with results difficult to compare and moreover, less prudential (the risk is underestimates due to the use of higher interest rates when discounting). 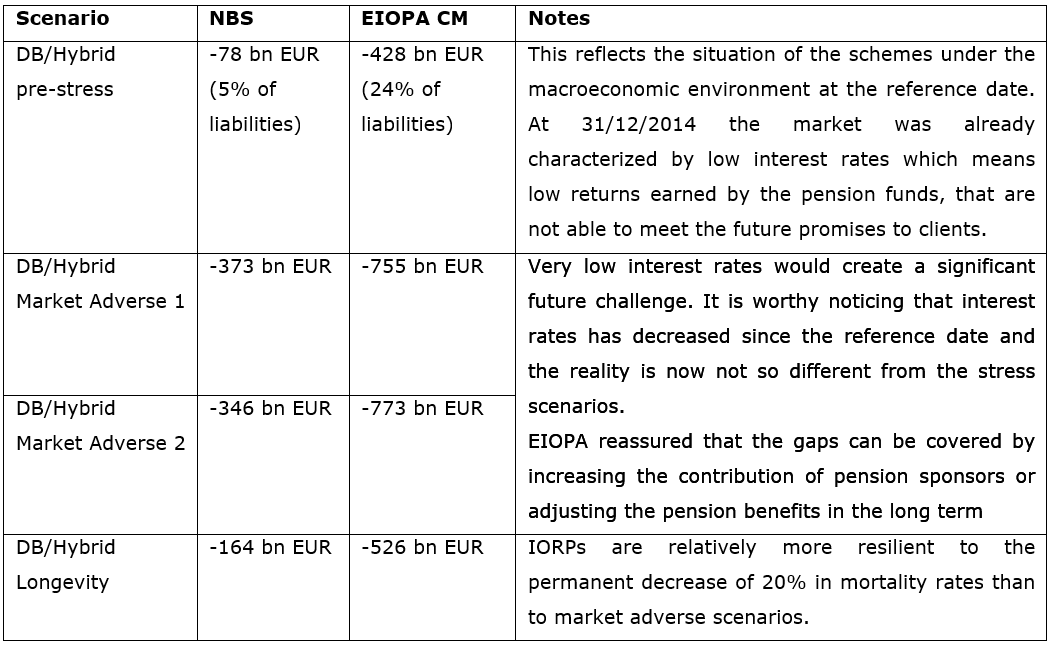 – the impact in the level of pensions is highly dependent on the time that plan members have before retirement: eldest plan members (closer to retirement) have the highest accumulated pension wealth and the least time to recover from price falls of assets; youngest plan members are the ones mostly impacted by long term low returns as they affect a larger part of their life-cycle

EIOPA will keep on working on a common market sensitive methodology towards the valuation of assets and liabilities and has planned to run a second stress test of the occupational pension sector in 2017.