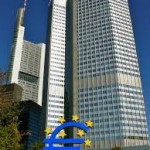 The Comprehensive Assessment (CA), completed on October the 26th 2014 by the European Central Bank (ECB) and the European Banking Authority (EBA), represent a milestone of unprecedented scope toward the Single Supervisory Mechanism (SSM) which started in November. It involved 130 banks for the Asset Quality Review (AQR) part with total assets of 22 trillion of euro (tr) and risk weighted assets of 8.5 tr, which accounted for the 81.6% of the banking system in the SSM; 103 of these financial institutions were involved also into the Stress Test (ST) analysis. After such a tough assessment it comes natural to draw some conclusions.

The CA was intended to accomplish two main tasks: define a level playing field harmonizing different (national) approaches to bank supervision and quantify the riskiness of the European banks. The first task was mainly addressed through the AQR focusing on bank’s assets on the 31 December 2013, the second one through the ST analysis based on two different scenarios on a 3 year window up to 2016: a Baseline Scenario (BS) and an Adverse Scenario (AS). 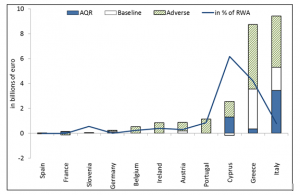 Source: our elaborations on ECB data.

The key quantity in the exercise is the banks’ capital shortfall (SF). In the AQR, a SF emerges if Common Equity Tier 1 (CET1) ratio after the AQR review is less than 8%; in the ST, a SF is recognized if the CET1 ratio in 2016 is less than a given threshold that depends on the scenario: 8% in the BS and 5.5% in the AS. All together CA produced SFs for 24.6 billion of euro (bln) across 25 European banks (Figure 1).

In a recent working paper (Barucci, Baviera and Milani, 2014), AQR and ST exercises have been evaluated looking at the determinants of capital shortfalls.

However, even if the analysis on the determinants of the shortfall in the ST confirms the main evidence provided by the AQR, it is not anymore true that a bank with a high CET1 ratio is characterized by a low SF in the ST: the most informative capital indicator to predict the SF of the ST turns out to be the leverage ratio. The risk density (risk weighted assets over total assets) and, coherently with the new Basel III regulation, the leverage ratio (common equity over total exposure measured according to the Capital Requirements Regulation, CRR) turn out to be important indicators for the ST SF, with a high adjustment in case of a highly leveraged bank. This evidence confirms the outcomes provided in recent literature (see e.g. Haldane (2012), Mayes and Stremmel (2013), Estrella et al. (2012)) on the relevance of leverage rather than the risk adjusted capital ratio.

Some distinctive features of the ECB approach performing the AQR exercise emerge with respect to the one of NCA. Let us mention two of them:

i) There is some evidence of double standards depending on the country where the bank group is incorporated; it seems that the ECB performing the AQR has played bold versus non-core country banks and soft versus core country banks. ii) The AQR outcome depends on bank size: medium size banks (large but not too large) are characterized by the strongest adjustments; there is also some evidence that the SF is negatively related to an indicator of the systemic role of the bank.

As the effect is confirmed also in the ST exercise, may we conclude that very large banks are less risky and are characterized by a better asset evaluation/risk management?

The answer is not so obvious. As we have already mentioned a high adjustment is observed in case of a highly leveraged bank. Furthermore, the AQR SF is negatively affected by the use of an internal rating based (IRB) model, but this evidence is not confirmed by the analysis of the ST, in which the adoption of an internal model (marginally) increases the SF. In particular, we find that those banks with a small risk density relying on IRB models are more exposed to risks. This result confirms the analysis contained in Mariathansan and Merrouche (2014) showing risk weighted manipulation through the internal rating based model mostly in case of weakly capitalized banks. As observed by Visco (2014), the evaluation of the criteria to compute risk weighted assets and the validation of IRB models emerge as one of the main points of attention for the future supervisory activity.

What looks clear is that the AQR exercise was mainly concentrated on the traditional credit activity rather than on the assets detained by banks: as a matter of fact, only €1.4 bln of the AQR SF is due to asset evaluation adjustments, while €3.1 bln come from Credit Value Adjustments (CVA) values revision and €43 bln come from the credit adjustments.

Can we conclude that some key elements are missing from the assessment?

Could some very large banks be facilitated by balance sheet management techniques using some financial engineering tools when facing CA and especially in the AQR part of the assessment?

Perhaps. It could be possible; some more words should be spent on these (at least) relevant questions.