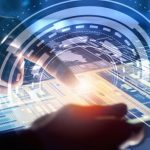 Digital banking can no more be considered a new topic, or a disruptive innovation adopted by some first movers. It is something already in place and well developed since 2008/2010. Its presence in everyday life has become more and more commonplace and today is unconceivable to consider a financial offer complete without an ancillary online service.

Global digital banking market is expected to raise up to $ 9 bln in 2026 with a growth CAGR of 16% (Research and Markets, 2020) during this forecasted period, also fostered by always new and efficient technologies and a more digitalized population. It is undoubted that this structural change brought more efficiency, less fixed costs, simpler access to banking services and a faster response to clients’ needs, only to mention main points. Digital banking is also spreading in other sectors such as telephony, smart-clock and assurance looking for a 360° service for always interconnected clients.

Europe follows this global trend showing a penetration of online banking generally quite high with an average of apx. 60% over total population, which is deemed to growth in future years, as well as an increase in cashless payments both through PCs and smartphones.

Within this evolving environment, Italy represents and unusual case being on one side one of the lowest-ranking country in terms of online banking utilization (34%) and cashless payment systems (apx. 6 thousand transactions pro-capite compared to the more than 20 thousand of UK and France) while on the other side a good incubator with Fineco (1999), CheBanca! (2008), Hellobank! and Widiba (2013), Hype (2015) and Illimity Bank (2018). All these institutes are successful bets with actual clients, in the case of Fineco fox example, accounting for more than 1,5 mln of deposits in 2019.

Digital innovation appears, therefore, to be well developed but sort of unable to complete the re-shaping of banking sector within the country. Barriers can be justified both by a population which is basically quite old (46 years old (Istituto nazionale di statistica, 2020)) and an expected fear of the change but also by some structural characteristics of the economic and social fabric which do not completely fit Italian system with a total digitalized solution.

More than in other European developed countries, the growth and evolution of Italy showed a different path among areas, with relevant discrepancies.

Italian economic environment is mainly composed by small-medium companies (SME) which accounts for apx. 80% of overall workers and apx. 90% of total companies (IlSole24Ore, 2019). Their contribution to GDP is far more relevant than in any other European country and by far more rooted with no short-term indication of change in act.

Strictly derived from past heritage, this configuration is still extremely actual and represents a significant part of Italian culture. SMEs’ role, particularly relevant above all in the Southern Regions, is also connected to the G.D.O. supply chain and big companies representing their fundamental and main contributor.

Different economies’ maturation among areas as well as country’s geographic configuration together with very differentiated level of services (first of all internet access) and richness level brought a coexistence of big and industrialized metropolis such as Milan, Turin and Rome and a constellation of small-medium cities based on a local and personalized economic fabric.

As represented in the chart above, in many Regions the economic environment is almost all composed by small merchants, companies with less than 20 employees or freelancers without any presence of big or international companies. This kind of environment tends to be less reactive to changes and above all greatly based on previous years habits. On the other side, international cities are directly in touch with new and disruptive shifts and, in a sort of way, aim to them.

As a direct consequence, level of internet connection and digitalization is greatly different within the country. According to the Digital Economy and Society Index (DESI) results for 2018:

Another relevant and directly connected feature of this system is the excessive use of cash payments. Apx. 86% of population prefers to use cash for payments while for credit cards it remains only the residual 14% (Conte, 2019). If it is true that cash payments are far more related to small-medium value transactions, it has also to be noted that the annum pro-capite number of transactions with digital systems in Italy is 50.7 which differs a lot from the European average of 117.

Interesting to fully understand actual system are the reasons reported to sustain cash payments according to a panel of more than 5 thousand of Italian contributors.

Going through the different motivations here reported, it is possible to assess that some of them can be managed with recent technology innovations such as payments through smartphones which are becoming more and more easy and secure thanks to the facial recognition or the quickness to pay through an electronic devices without any signature needed.

Reasons addicted are clearly a further indication of a lack of financial digital education but also a clear reference on how current system is based on trust between contractors and simplicity.

Direct and strict relationship with local bank workers is considered a value added to the services even if the time to access them is a bit longer.

All these characteristics do not let digital banking be less innovative or less central to the future of the system but can partially explain its different propagation.

Digital banking is the future and this fact is well known, by all insiders and not. Technology infrastructures, economic systems maturity and level of financial education are potentially not completely ready to sustain and foster this change.

A flexible approach for the change’s introduction in some areas could be beneficial and could also allow banks to exploit some potentialities still running.

In terms of technology, instead of proposing a completely digitalized solution without any human contact, it is possible to introduce a hybrid solution where digital can be an enhancement of physical offices. Automations useful to offer basic services like ATM withdrawals/deposits, basic loan requests or modifications to bank account information open 24/7.

Regarding physical bank offices, which represents a relevant fixed cost and can produce a limited marginality, some new solutions already in place abroad are banking hubs: cohabitation of multiple banks in the same building where co-investments can be done.

Rejuvenation of the population surely assure digital services providers a continuous growth of future customers but, above all in quite old countries such as Italy, the other portion of the population, which is also the high-income one, must be considered. At least now and in the short-term.

Considering all these points, it cannot be assumed that Italy is on delay on the digitalization process. It probably is at the correct status respect the actual environment on which the change process is taking place. To force it to speed-up or to blindly concentrate all effort in this direction disregarding potential source of profits could not be economical.

Statista, “Number of payment transactions involving non-MFIs per country in Europe in 2018”, 2019